Taking a deep breath in China

The air in Chinese conurbations is as filthy as ever. In more than 90 per cent of the cities, the fine particle pollution exceeded the set threshold again in 2016. In Beijing and in Shanghai the smog levels were often even twenty times higher than the threshold upwards of which, in the opinion of WHO, there is a health hazard.

However, Chinese society is slowly beginning to change its thinking: environmental organisations and civil protests have put pressure on the government to drastically lower emissions. But no matter how quickly China really takes up the fight against environmental pollution, international companies, seeking to improve their employees’ quality of life and work, are fighting pollution in the country their own way. On request, together with M&P. In this context, our team of experts offered specialist and project management support to DBEST Facility Technology Management, who were commissioned by Siemens China to ensure a good quality of air in all offices of the electronics company. A flagship project through and through.

Starting with comprehensive measurements taken from the air-conditioning systems and in the offices using our own measuring equipment, flown in especially, we came up with a series improvements in collaboration with the system operators, implemented them on site and then evaluated the results. 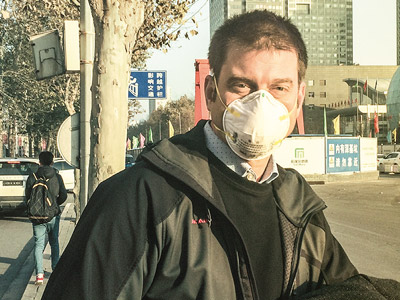 More recent research has shown that what is known as the so-called PM 2.5 share in particulate matter is particularly hazardous to health, since particles of this size can penetrate the air sacs (alveoli) in the lungs. For this reason, we installed a special filtering system in the buildings, together with DBEST and Siemens. The new technology removes even the tiniest dust particles from the air, almost inaudibly.

Using a smartphone app the project was made visible and understandable to the 5,000 Siemens employees. The app is continuously fed with data from numerous sensors distributed throughout the building, providing real-time information the current quality of air within the building and outside the premises. In addition, a large monitor was installed in the lobbies of some of Siemens’ larger buildings, informing all visitors about the clean air conditions inside the building.

Ekaterina Zhukova, one of the M&P managers on site remembers: “Explaining the technicalities of the new system to the local bosses was not always easy, but the effort, sometimes involving recourse to gestures, has paid off: True to the Chinese saying, we introduced a little light and much better air into the dark in China’s offices, which often had very poor air quality.” To shed some light on the matter – this probably also describes the general motivation of our China travellers, Ekaterina Zhukova and the entire energy team, when they actively engage with clients in Germany, Europe and, increasingly, across the globe.