Sometimes, work and alcohol do go together!

The scope of services of M&P

The ABI Group (Anheuser-Busch InBev) is the largest beer brewery conglomerate in the world and is represented at various locations in Germany. The Beck’s brewery from Bremen has been part of the Group since 2002. The northern-German Hanseatic city is also home to the German headquarters of the ABI Group: the legendary Beck’s Tower, an administrative building from the 1970s in urgent need of renovation. Following detailed discussions, ABI decided to retain the Beck’s Tower and extensively modernise the high-rise building in compliance with the specifications for monument conservation. The ingredients for this special recipe are supplied by M&P and APLEONA.

In 2019, M&P was commissioned with the project management for the renovation of the Beck’s Tower in Bremen. APLEONA acts as the operating company for ABI and coordinates the modernisation services on-site. While the work in the building continues, storeys are successively closed off so that the modernisation can be carried out in parallel with normal operations. A task that requires good coordination and monitoring by our experts: the building has an area of approx. 8,000 m2 and two basement floors in addition to the ten storeys above ground.

As a first step, the project team coordinated the scope of the modernisation on a sample storey and established the process steps. In addition to necessary renovations in the field of fire protection, extensive changes for users were planned. For example, the suspended ceiling was removed and ceiling sails were hung for sound insulation – with lighting and ventilation in the layout of well-known ABI products.

In communication zones designed for people to come together for conversation, beach chairs now stand on the finest sand from the North Sea, while in the open-plan offices there are think tanks that make it possible to work without disturbing background noise. 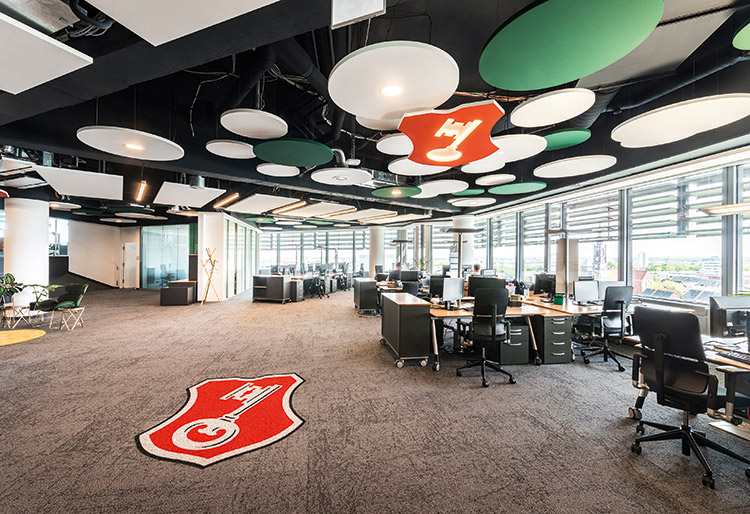 Together, M&P and APLEONA are also organising the relocation management so that necessary changes of location during ongoing operations take place promptly and without major complications.

At ABI, the construction project has already attracted attention from beyond Bremen: guests from abroad have praised the new layout of the office space. The modernisation will continue in 2022, and other ABI departments will then be integrated into the headquarters.

‘The challenge is to organise the complex renovations during normal operation and to take into account the change requests of all users during the project,’ says Dr Thomas Gartung, Project Manager at M&P. ‘Each floor is slightly different and every department has different wishes. But that is what makes this project exciting.’